Phil Snider was born and raised in the heart of the Ozarks, where he still makes his home today. He’s been a pastor at Brentwood Christian Church in Springfield, MO since 2003; he teaches courses in religious studies at Missouri State University and Drury University, as well as courses in ministerial practice and practical theology at Phillips Theological Seminary.

Phil’s pastoral work and scholarship explore the promises and possibilities at work in various liberation theologies, affect theologies and radical theologies, particularly in relationship to church practices. While focusing on the intersection of faith and public life, his work has appeared in collections alongside Barack Obama in the U.S. and N.T. Wright in the U.K. His religious commentary has been featured in The Huffington Post, MSNBC News, USA Today, The Daily Mail, The Kansas City Star, Religion Dispatches and numerous other local and national media outlets, including NPR affiliates and nationally-syndicated radio and television programming. He once had 15 minutes of fame when a speech he gave on equal rights went viral (but it won’t make sense if you don’t watch it to the end).

Phil’s own books (as author or editor) include Preaching as Resistance, Justice Calls, Preaching After God, The Hyphenateds, and, with Emily Bowen-Marler, Toward a Hopeful Future (winner of the 2011 Mayflower Award for best book in church and society). Additional forthcoming titles include two volumes (edited with Katharine Sarah Moody) for the series Intersections: Theology and the Church in a World Come of Age. He’s also a contributor to a handful of other books, most notably The Palgrave Handbook of Radical Theology.

“Phil Snider reads these vital thinkers seriously and subtly, pouring their new wine into the old wineskins. Why? So as to crack open the actually existing church and help prepare the way for a new reformation.” – Peter Rollins

Phil did his undergraduate work at Missouri State University (Springfield, MO), then earned his masters degree at Phillips Theological Seminary (Tulsa, OK) and doctorate at Chicago Theological Seminary (at the University of Chicago). He also holds a certificate in pastoral care and counseling from Forest Institute of Professional Psychology and has been the recipient of various leadership awards from a number of national and local organizations, including The Pilgrim Press (Cleveland, OH), GLAD Alliance (Indianapolis, IN), and Minorities in Business (Springfield, MO).

As an extension of his pastoral work with Brentwood Christian Church, Phil has served in various leadership capacities in the Springfield community over the years, including as President of the Drury University Board of the School of Religion, member of the Diversity and Inclusion Advisory Council at Missouri State University, member of the Equity and Diversity Advisory Council for Springfield Public Schools, co-chair of the Springfield chapter of the NAACP Religious Affairs Commission, president of the Springfield Ministerial Alliance, founding member of the Center for Diversity and Reconciliation at Brentwood Christian Church, founding member of the Greater Springfield Race and Faith Collaborative, representative leader to the Springfield Interfaith Alliance, and chair of the leadership table for Faith Voices of Southwest Missouri, which is dedicated to promoting economic dignity and race equity for all Missourians. He was also the co-founder (with Katharine Sarah Moody) of the Subverting the Norm conference series at Drury University.

[For media inquiries or speaking engagements please use the contact page.] 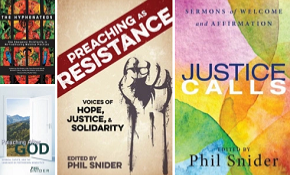 Here’s the background on the rotating header images: